An Interview with Falguni Kothari 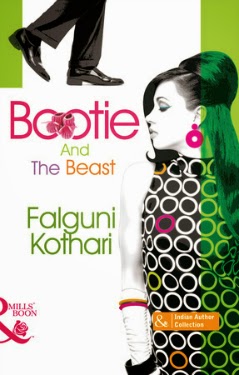 Fairytales don't end with True Love's Kiss, they begin with one...
Diya Mathur (aka Beauty), celebrated supermodel and Party Princess of India, is adored by everyone. She works hard, plays hard, and has the biggest shoe fetish on the planet. But after she purchases one baby bootie, Diya's reputation is in ruins. There's only one place to escape the rumours - Texas, under the protection of her lifelong friend, and secret love, Krish Menon (aka the Beast).
Financial whizz-kid, CFO and entrepreneur, Krish is a brooding workaholic with a charisma that still brings Beauty Mathur to her knees. He has no idea, of course! They've shared a bond since childhood - a special friendship that thrives on sparring, teasing and goading - but with Diya back in his life and under his roof, Krish's latent desire for her explodes. And when he finally admits to the secret that has never allowed him to commit to any woman - especially Diya - everything changes. Krish might finally realise how much he wants his Beauty. But he won't get her until Diya has tamed her Beast.

Book Links:
Amazon UK I Amazon India I Mills and Boon I Harlequin India I Flipkart 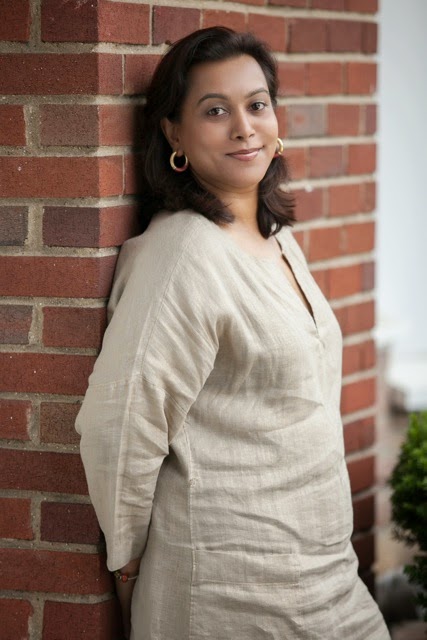 Falguni Kothari is a non-traditional homemaker who accidently tripped on a misplaced soccer ball and fell down the writer’s rabbit hole. Having no more experience with the whole writing/publishing shebang than being a voracious reader and movie buff, it more than surprised her that she could, in fact, write a full-length novel.
Now, several manuscripts down, when she is not trying to find a way out of her many domestic duties or cajoling her Latin dance coach to compose a rumba on Bollywood music, she is found embroiled in some or other scandal—sorry, creating stories—on her ever-faithful laptop.
She’s authored Bootie and the Beast, It’s Your Move, Wordfreak! and Scrabbulous Impressions, a short story. She rumbas across a whole smorgasbord of Social Media daily and loves to connect with most living things.

- Please tell us a bit about yourself.
Hello! Thanks for having me on your blog, Vishal. To answer your question in the simplest of terms, I am a woman, author, daughter, wife, mother, dog-lover and general domestic-crisis solver. 

- How and when did you decide to get into writing?
How? It was by accident, I swear.
When? In 2009, I believe.
The story goes like this: I was vilifying my brain with my un-ambitions—this according to my mother. Though, I didn’t think anything of the sort. I was after all attending PTA meetings and ladies luncheons and kitty parties. I was busy! Anyway, she nagged me into “doing something for myself” and I decided to take some online university classes. Why? Well, because I’m sort of a nerd. I love books, and discussions about books, and debates about life and philosophy and the state of Man and his environment…so, I’m a nerd and I couldn’t think of a better way to “do something for myself”. I took a class called Romance Writing Secrets on a lark, just because it sounded so fun…and it was! I began writing It’s Your Move, Wordfreak! as part of my final class assignment. So, I guess my mother was right?! Horrifying thought, but true in this case.

- How much research goes into a book for you?
A good bit of my book-writing time goes in research. I am quite anal about the details I write into my books, such as, Beauty Mathur from Bootie and the Beast is a supermodel and I will want my readers to know and understand exactly the kind of things a model has to deal with personally and professionally; from fans, family pressures, paparazzi, gossip, contracts, agents, thoughts, lifestyle—everything. Same goes for a financial analyst or CFO, like Krish. I am neither a CFO nor a model, and to write those characters with any kind of authenticity means I must do a lot of research and ask a lot of questions to the right info source. Same thing for the setting…I have never been to Dallas and had to research its environs to suit my novel’s purpose.

- Tell us a bit about your debut Novel - It's your move, Wordfreak!
It’s Your Move, Wordfreak! is a contemporary romance in which the protagonists, Aryan Chawla, aka Wordfreak, and Alisha Menon, aka Worddiva, first meet and subsequently fall in lust with each other via a game of online Scrabble. The novel starts after the fact, when Wordfreak has convinced Worddiva to meet with him for real.

- Bootie and the Beast is your latest release, how is it different from those in its genre?
Well, I’ve been told that my writing style, my language and content are not typically “romance.” I have written Bootie and the Beast with romance as its premise and fairytales as its theme, so I can’t claim it’s different from its genre. But every writer brings his or her style into the story and I guess mine is effervescent in its romance (I’m quoting there) with real life issues underscoring my prose. I also don’t believe in dumbing down a book or its protagonists just because it’s a “simple romance.” I do not believe in shortchanging my readers. I want my readers to enjoy the book as well as learn something new from it…be it a new world or a new word.

- Who is your favourite character and why? Does he/she have any of your personal traits?
In Bootie and the Beast, if I had to choose between Diya and Krish, I would say Diya only because she is so NOT me. The only thing I believe Diya and I have in common is our “free-thinking” of certain societal issues and our belief that “Men are not equipped to deal with life’s vicissitudes.”

- Getting published is a long process, which part of it is your favourite?
1) Signing the contract and
2) Receiving the first-look at the cover and typeset of the novel. Oh. My. God! I am literally flying in space on those two days. And on the days I receive royalty/advance payments.

- Has life changed for you after being published?
Of course! I have gotten more confident in my writing. A whole new world has opened up for me: public speaking, giving interviews, giving advice to those who ask for it, promotional events, educational events… Best of all, my mother can no longer scold me about “doing nothing constructive with your time, whatsoever.”

- Who has influenced your writing style and how?
Hm, if I had to pick four authors who have maybe not influenced me so much as they inspire me to write and write and write are: Shakespeare, Jane Austen, Nora Roberts/J D Robb and Diana Gabaldon. I’m a huge, huge fan of these accomplished individuals.

- What would be your writing tip to the wannabe authors?
Pick a spot. Sit down. And write. Just write, even if its rubbish. It will eventually lead to something worthwhile.

- If you find yourself on a deserted island, what three things would you want with you?
That would depend on how long I’m deserted on said deserted island. Let’s go with I’m there for good with no hopes of rescue...
1) An indestructible tent for shelter.
2) A supply of matches to easily build an everlasting fire.
3) Shah Rukh Khan. (Clothes optional.)

- Which celebrity would you like to be stuck with in an elevator?
Um. Read #3 from previous question. Although, recently, I’ve been fangirling Tom Hiddleston like crazy. So he would be a good option for the elevator adventure too.

- What are you working on right now?
My work-in-progress, dubbed LUHU, is an unconventional romance in which my three protagonists will do anything for each other, including sacrificing their own happiness to make the other two happy. I’m not very far in the story, so only have a vague idea of how it ends. Consequently, I’m waiting for some news on another manuscript—Book 1 in an urban fantasy series. Lets all cross our fingers (and toes) for that one. I have huge hopes for that series.